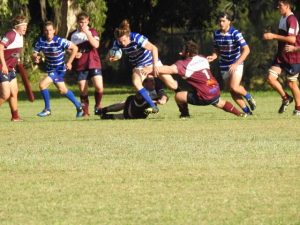 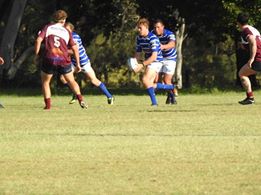 The boys in Blue came into Round Three on the weekend off the back of 2 strongly contested wins against Lismore last week. Facing the Casino Bulls away, the longest and most notorious bus trip of the season, a competitor never to be taken lightly. With overshadowing doubt as to whether or not the club could field 2 teams, due to 14 club men out varying reasons from pregnant partners to injury, a mammoth effort would be required from the club to pull off a double win.

In time of need, the boys looked to club president and all round legend Sir Eddy Brown to be the first club president to pull on the boots and play. Whether or not this had positive impacts on the field is still being debated, but it sure did set the tone for what was going to be a fiercely fought contest.
CRABBIES
The Sandcrabs have found there form early in the season and looked to continue there winning streak, making it three from three this year. With a very tall help from Will Aisake (who pulled out the double in his last game of the season, Adios Amigo!) and Jo Common, the crabbies started the game like a bat out of hell with fast hands and excellent rolling rucks to have Casino on the back foot early.
Teumsy and Lynchy played like long lost brothers, both running hard fast lines, looking for the off load. Mark Howard had an absolute screamer of a game, playing like a man possessed at times grabbing the ball looking for holes or the next best thing, the poor fella in his way. The injection of big Will was a welcome one, showing true determination in our five metre, using his strength to rip the ball off the attacking bulls.
Dan George rallied the troops, communicating well and guiding the piggies straight up the guts. The pick and go by the crabbies was unreal, at times rolling 40 metres down the pitch. Josh continually busted through the 12-13 without hesitation, also taking control at the back of the maul, guiding the boys over the line for their second try.
A lack of spice from the boys in the back end of the first half saw the bulls capitalise, taking advantage of their winger who was faster than two shakes of a lambs tale, leaving us for dead and grabbing a 5 pointer.
The boys were in need of a lift as Lynchy went to work flat out like a lizard drinking. Constantly looking for the ball, setting up the play and showing courage throughout.
Joshy’s enthusiasm and intensity at the back of the pack continued to pay dividends with yet another burst close to the line, finding a hole (contrary to rumour) and charging over for his hat trick!

A slight loss of focus towards the end of the second half saw the bulls take a quick tap and send there biggest fella exploding over the line. In true Byron style, the boys in blue upped the anti and came firing off the kick off. Coony showed no fear charging up the line putting pressure on the opposition, setting off a domino effect that led to Mark The Shark Howard topping off a stellar birthday performance with a meat pie.

FINAL SCORE: 29-14
1st GRADE
Byron Bay applied pressure early on Some sharp hands and lightning fast clear outs by the bay left the opposition gobsmacked and sending Hamish over in the corner, setting the pace for the Bay.
Dru Baggaely came onto the pitch ready to make an impact dropping Casino front rowers faster than a schooner in a bushfire. The bay had a number of promising moments in the initial stages of the game, Sammy Shiner showing footwork like a duck on a hotplate, returning the ball with serious gusto. Fat 10 worked hard to turn casino, incorporating a chip chase, linking up with Sammy and Blakey. Casinos boot was there saviour in the first half, punishing the bay when the ball was turned over after 50 yards of hard work.
Although The Bay were constantly penalised, it wasn’t until just on half time that casino finally capitalised on the gifting of territory. A fine piece of play from Casino saw a successful line out lead to text book draw and pass, ending in the Bulls first 5 pointer.
Constant pressure at the kickoff by Sloyan led to fast turnover and possession percentage sway in favour of the bay. Baggaley, Woolard and Cash led the charge as the piggys forced a penalty. Never one to hesitate, big Charlie charged over the line to snag another meat pie for the bay. Sloyan continued some aggressive play forcing turn overs with the pilfer and a penalty in front of the posts.
Loik Masvidal copped a late challenge leading to the referee apprehensively yellow carding the bulls winger. With one man down, it was time for the boys in blue to step up their game.

Although a deflection off the upright, Byron managed to maintain possession, executing the rolling maul of thunder and a ripper try.
The Bulls came out firing with some great hands putting byron on the back foot. This momentum saw the bulls execute an excellent set move off a scrum, with the bulls 14 scoring in the corner.
Under pressure from a firing and hungry bulls side, James B showed ice cold skills under pressure kicking the bay 50 metres out of danger zone.
A string of strong phases off the back of some strong defence, and Benny and Rudkin again linking up out wide.. The bays line-out found its groove setting the platform for Bedwyr Davies to score a screamer.
Big Will, J. Smith and Woolard rallied the boys, leading by example and tearing up the guts of the paddock. With 10 mins to go Stocks slotted what seemed to be a wild grubber towards the in goal. In disbelief the crowd went wild as the pill hit the upright perfectly for Stocks to regather and score under the posts.  Ironically he missed the conversion in front.
The Bulls are no fans of French men as Loik cops another high tackle, leaving the referee no choice but to send another bulls player to there cosy tin bin.. As the bulls players sat on each others laps to keep warm as the rain came tearing down, Drew was just getting warmed up. Off the back of some fantastic hit ups by the piggys, Dru grabs the pill, has a sniff and bowls over 3 possibly 7 Bulls to score under the posts.
With a number of forced errors, some tough decisions being handed down all day and a mammoth effort from all in the club, the bay showed some true grit and character to pull off a double win away! Bring on Bangalow!!!